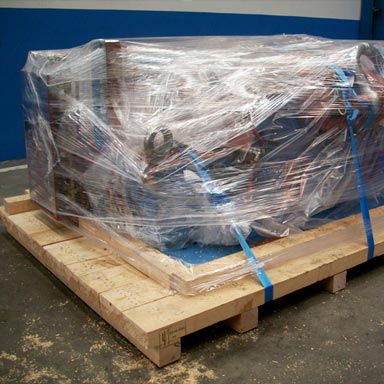 We offer advice and packaging solutions that objectively fit your needs.

We assume all your packaging needs and logistics aspects, from advice to final delivery of the goods at destination.

We have our own fleet of vehicles to facilitate a quick delivery in the place that our customers need.


We provide packaging solutions for any type of machinery, goods and equipment goods regardless of their complexity, size or weight.

We have the necessary technology to handle our customers’ goods, forklifts, crane bridge, etc.

We have vehicles equipped with everything you need to carry out any job where the customer has. We bring our workshop to your facility.

Loading and unloading containers optimizing spaces. Loading in containers with all kinds of materials and fixing systems approved.
STANDARDS AND CERTIFICATIONS

International standards and certificates that guarantee the know-how of our company in the field of packaging production and business management.

The ISO 9001:2008 Standard developed by the International Organization for Standardization (ISO) determines the requirements for a Quality Management System (CMS), which can be used for internal application by organizations, regardless of whether the product or service is provided by a public organization or private company, whatever its size, for certification or for contractual purposes.

ISO is an independent, non-governmental organization that currently brings together 162 members from different countries around the world. The agency began after World War II (February 1947) in which delegates from 25 countries gathered in England to coordinate and unify global standards.

Depending on the country, the same standard “ISO 9001” may be referred to differently by adding the name of the body representing it within the country: UNE-EN-ISO 9001:2008 (Spain), IRAM-ISO 9001:2008, etc., accompanied by the year of the last update of the norm.

ISO 9001: Contains the requirements of the management model.

(NIMF) No. 15: International Standard on Phytosanitary Measures (NIMF) No. 15, established by FAO, regulates wood packaging used in foreign trade, and describes phytosanitary measures to reduce the risk of introduction and spread of pests and forest diseases in countries.

Treatment of this standard is necessary when exported to the most industrial countries, including those in the EU, United States, Canada, Mexico, China, Korea, Australia and New Zealand, among others. Countries that have signed ISPM-15 have the right to refuse entry at their borders to goods in pallets, boxes and wooden packaging that have not been treated, marked and certified in accordance with their regulations.

The European Union has incorporated phytosanitary treatments from ISPM 15 into Community legislation by amending Directive 2000/29/EC, which entered into force on 1 March 2005. In the Spanish territory, it is the Ministry of Agriculture, Fisheries and Food (MAPA), through the Directorate General of Plant Health, the body that manages the registration of companies authorized for the application of ISPM No. 15.